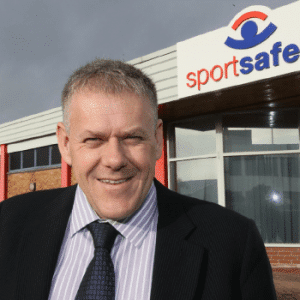 The tools in the Align software and the customer service their team provides — it makes it possible for me and my team to accomplish the big things we set out to do.

In the United Kingdom, it’s a best practice that sports and fitness equipment — whether at a hospital, high school, college or university — be inspected once per year. Like a car that needs to meet certain regulations, sports equipment must be checked to ensure its continued safety.

That’s where Sportsafe UK and its founder, Jon Neill came in.

But when he founded the company in 1997 with a team of two and a single client, Jon’s success was far from inevitable.

Jon left school when he was 17 and entered the sports equipment industry working for a company that would — decades later — become a competitor. He grew into a successful engineer and stuck with that company for 20 years.

As he gained experience, he saw inefficiencies.

“I remember coming home from work and telling my wife I wanted to start my own company,” Jon remembered, “and that, even though I didn’t have any business experience, I thought I could do this better than anyone else was doing it. She told me I was crazy and reminded me I couldn’t even install a shower pump in our house,” he laughed, “but I thought I was onto something!”

Under Jon, Sportsafe doubled in size every year for its first decade. They used innovation to help usher an industry that relied almost entirely on typewriters into the digital age. And, as the company grew, the team earned accolades, awards and a larger share of the market.

But eventually, that growth got to be too much. The team couldn’t keep up, and Sportsafe began experiencing cash flow issues. “We were just growing too quickly,” said Jon, “and we couldn’t cope with it.”

It was about this time that Jon brought on Peter Boolkah as a business coach to help him address some of Sportsafe’s biggest challenges. They created a senior management team and Peter introduced Jon to an early version of Align.

One thing Jon said he noticed about Align right away was that it helped him and his executive team identify who in the organization was a good fit for the culture they were trying to establish and who wasn’t. “Some people didn’t like the transparency Align brought to their work,” he said. “They complained it felt too much like Big Brother watching you. But we also saw another group of employees emerge who loved that transparency as well as the accountability that came with it.”

And Jon learned those were the people — the ones who thrived on accountability — he wanted. “As we progressed, we had more and more people who craved that. They loved seeing their task status turn green when they were on track, and they loved getting the rewards that came with it. They loved it so much it became a habit. Align helped motivate them and it kept us moving toward our priorities.”

The software pushed the senior management team to create a One Page Plan outlining the direction and big priorities of Sportsafe in a single, succinct document. Now every employee — whether they were a manager, an engineer, an accountant or a secretary — could see how their individual roles and tasks fit into the company’s long-term plan.

“It was incredible,” Jon recalled. “We had 110 people pulling in the same direction. Teams would meet in their 15-minute Huddles every morning to check-in on their tasks, and each employee was able to see how their tasks for the day would advance the priorities in our One Page Plan. They said they felt like their work mattered — because it did!”

At the end of the day, each employee would update their Align Dashboard with the progress they made, as well as any questions they had, allowing managers to quickly check in on the status of their team’s work and plan for the next day’s Huddle. Everyone in the organization had real-time data at their fingertips and an eagle-eye view of the company — including Jon.

“We had offices in Scotland, Birmingham (UK), Wales and London. It would have been so easy for us to retreat into our own silos. But Align helped prevent that. All the offices would be making their updates on the Dashboard at the end of the day, and so senior management could see how everything — from Scotland to the Midlands — was progressing.”

That organizational focus allowed Sportsafe to transform their company, as well as an entire industry.

Jon remembers when they received their first computer in the late ‘90s. “I had to watch a VHS instruction guide to learn how to turn the thing on!”

But much has changed for his company since then, and Jon feels Align has a lot to do with it.

“If we uncovered an innovation we wanted to implement throughout the organization — before Align, it might take us a year. Often, we’d lose steam and putter out before we finished. Or we’d get distracted. But, with Align, the entire company is singularly focused on a priority, and its software forces you to talk about that priority every single day.”

All of a sudden when Sportsafe decided to make an innovation a focus, it would become an organization-wide habit within a single quarter!

And these would often result in big gains for Jon’s most important stakeholders: his employees and his customers. One example of this is when the company gave each of their engineers an electronic tablet to take with them for each inspection.

Before the tablets, engineers had to type up a three-part paper report after each site they visited. Besides taking a huge amount of time out of an engineer’s day, and aside from costing the company a lot of money, this archaic system also meant the customer would be waiting weeks to find out if their athletic equipment was safe for users.

But life was different once Sportsafe implemented tablets. They had trackers on them, so the company and their customers knew exactly when the engineer would be on site. And the tablet would dictate workflow so the engineer didn’t miss any steps like a risk assessment or a follow-up. “And most importantly,” Jon remembered, “as soon as the engineer finished an inspection, all they had to do was push a button and the process that once took weeks was now automatic: if the sports equipment was up to code, the customer would immediately receive a certificate; if it wasn’t they’d receive a quote for the work that needed to be done.”

And, if you’re hoping to service 20,000 schools in a year, that automation is key.

“We couldn’t have done it without Align,” Jon insists. “When we decided to move forward with an innovation, we’d make it a priority for the quarter. And once it became a priority, every employee in the company had tasks on the Dashboard that moved us closer toward implementation. It would be in our One-Page Plan, our Leadership Team would talk about it in our meetings, and employees and teams would discuss it with their managers each day in their Huddles. We were 110 people moving to the beat of one drum.”

That organizational focus would pay huge dividends for Sportsafe again and again, but perhaps never more than in 2015 when Jon’s team decided to solve its £100,000 problem: something they call, “Returns.”

Jon explains, “A return can be any kind of failed job, and it’s one of the most important aspects of a company like ours.” A return might occur because Sportsafe’s warehouse didn’t have the correct parts because a school was closed the day an engineer was supposed to inspect their equipment, or “for one of a thousand other reasons. But, whatever the reason, it means the job didn’t get done, and that costs us money and affects customer satisfaction.”

To address the problem, Jon turned to Align’s “Quarterly Themes” feature — designed to be a fun motif a company can use in its internal marketing to rally their team around achieving a priority. Sportsafe was masterful at using this tool. Their marketing team would create videos and presentations and — depending on the quarter — they would create Star Wars themes, Superman themes, and a host of others.

But the Returns Theme was their most successful. When Returns became a priority for the quarter, the company set a 5% return rate as the goal — way down from their then-current rate of 25%. That meant one out of every four site visits was a “failed job,” costing the company more than £100,000 each year!

The team identified best practices in minimizing Returns, and every Sportsafe employee — from the warehouse team and the marketing team, to the engineering team and the administrative team — focused on tasks in their Align Dashboards that would address this company-wide priority.

Presentations and internal marketing materials were created, prizes were awarded to the team members who most impacted the goal, and the whole team was rewarded when benchmarks were reached.

“I knew Align’s Quarterly Themes worked well for our company, but I didn’t think there was any way we’d get down to five-percent,” Jon admits. “But never underestimate the power of a motivated team. In a single quarter, we got down to 4.5%, and it never went back up!”

Jon sold Sportsafe at the end of 2016, and just as it played an important role in his management of the company, it also provided additional value as he handed it off to its new leadership.

“I remember when they came to visit our Quarterly Meeting,” he said, “they were blown away. They looked at our One Page Plan and they said our strategic outlook was far beyond what they had seen from other companies. They loved our culture. They loved the way we innovated and the buy-in from our team. They couldn’t believe our Dashboard and the accuracy of data at our disposal. Align was a huge, huge tool for me as I sold. I knew we were an organized company, but it allowed me to show that off to potential buyers.”

But just because Jon is no longer leading Sportsafe doesn’t mean he isn’t still using Align to make a difference.

“I met a university professor in Colchester shortly after selling Sportsafe,” Jon said, “and we came up with a plan to build an athletic center. We worked together for two years on it with a small team of six and — of course — Align. Now they have a £12 Million center and I’m really proud to have taken part.”

“And I’ll keep turning to Align as projects come up in the future. The tools in the software and the customer service their team provides — it makes it possible for me and my team to accomplish the big things we set out to do.”