Neale Lewis has established himself as one of England’s top coaches for scaling businesses using the strategic planning principles of Verne Harnish.

Using software to track his client company’s execution of their plans took Neale’s practice to the next level. Using Align helps Neale keep his clients accountable and focused on achieving results. 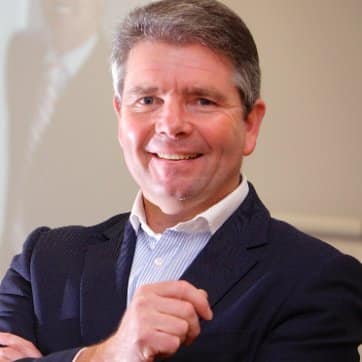 With Align and the Rock Habits, there’s a clarity of goals and objectives, as well as a culture of empowerment and accountability. I’ve seen that do wonders for the engagement of my clients’ employees.

When Englishman, Neale Lewis, took redundancy from his job in the hospitality industry more than a decade ago, he wasn’t sure what his next move was going to be. He’d worked at Molson Coors for 20 years and hospitality was all he knew during that time.

But an opportunity came up for him to get involved in business coaching, and he turned out to excel at it.

“Of course, that was at the start of the Global Recession,” Neale laughs. “And I had a young family with school fees to pay, so not great timing on my part, really.”

The Recession has come and gone, but Neale Lewis Associates is here to stay. They’re driven by the desire to help mid-market — and aspiring mid-market — companies build value and sustain high performance. And that’s exactly what they’ve done. Since 2013, Neale and his team have worked with his client companies to increase their revenue from just over $246 Million to more than $350 Million. That’s an average increase of 43%!

They’ve managed to increase the profitability of the companies they coach by nearly 40%, and those companies — in large part due to Neale’s leadership — have created more than 1,000 new jobs.

“That’s our real pride,” Neale says, “the number of jobs we’ve created through the companies we coach. That feels good.”

So how did Neale go from the founder of a small coaching company weathering the waves of a recession, to the leader of an organization making a difference in the lives of thousands of people?

Well, it started with a chance meeting in Spain, of all places.

“A couple of years after starting my company, I was at a conference in Barcelona” Neale remembers. “And that’s where I had the good fortune of meeting Verne Harnish.”

Harnish is most famous for his books, Mastering the Rockefeller Habits and Scaling Up, both of which are a compilation of the guiding leadership and management principles thought to make John D. Rockefeller and his Standard Oil one of the great success stories in American business history.

“That meeting with Verne is what really got me started with the Rock Habits.” Harnish suggested Neale become a Scaling Up Certified coach — an esteemed group of business coaches, closely aligned to the business practices laid out in Scaling Up. “And that helped me attract larger market clients than I previously could.”

That was six years ago and, today, the Rockefeller Habits are a key component of Neale’s coaching.

“I work with my clients to create a plan for Scaling Up their business,” Neale said, “and we set a laser focus on that plan.”

He starts by honing a client’s Core Purpose (the “why” of their business) and their Core Values — both essential parts of Harnish’s books — to begin the process of cultivating a company culture. Next, Neale will move to two more Scaling Up components: the One Page Strategic Plan and the 7 Strata of Strategy, to establish where exactly his client’s want to go and how, together, they are going to get there.

But amid all this talk of coaches, company culture, business habits and strategy, Neale points out that there is an additional element that helps him and his clients establish and sustain growth. “Align has been essential in implementing these tools successfully,” he says. “These are all outputs we capture and track in Align’s software, and that makes a big difference.”

The business habits outlined in Rockefeller Habits and Scaling Up are proven to make a positive difference on bottom lines. But only if they’re implemented the correct way.

That’s exactly what Align is designed to do.

“It’s a powerful tool in so many ways,” Neale explains. “It’s a planning tool, it’s an execution tool, and it’s an accountability tool.”

Let’s isolate each member of this trio to see exactly what Neale means.

Ambition can be a good thing. But, when business leaders want to accomplish a wide variety of objectives — as they so often do — they run the risk of wandering.

Neale says, “When I begin working with a company, I’m insistent they use Align because — right from the start — it challenges them to be disciplined and focused on just a handful of key priorities.”

He has his clients focus on a manageable number of objectives to start, and those priorities are logged into the Align software. “By having those right in front of us and updated in real-time on Align, it pulls the company away from all those other things they could be doing, and keeps them on the plan and moving toward accomplishing their priorities. That’s the laser focus and discipline I was talking about.”

But instilling focus and discipline throughout an organization can be hard work. Neale says it’s common — especially in those early stages — for some clients to try to avoid using the tool the right way, or to adapt it to make it easier.

But those that stick with it and use it the way he shows them?

“Oh, it’s clear those companies achieve more in less time,” he insists. “It cascades right down through the organization. When used properly, it’s impossible to look at Align and be unclear what the focus of your company is. Everyone understands where the business is headed, and that’s the software’s great strength!”

Okay, so your priorities are set and every member of your company is pulling in one direction. That’s a great start, but now it’s time to actually accomplish those priorities. And, as an execution tool, Neale feels Align makes that easier, too.

“It helps us break those big objectives we agreed upon into bite-size tasks. It allows us to execute a game plan and brings operational excellence to my client and to my coaching.”

And because everyone in the organization — from the c-suite to the ground floor — can see the direction the company is moving, employees are better able to set and accomplish meaningful daily tasks.

“With Align, it’s clear as day what the next step is and how every step aligns toward achieving our larger goals. It’s all about driving excellence in your organization through better execution.”

Not only does Align make it clear what the next step is, it also makes it clear who is responsible for accomplishing that step.

One way it does that is by pushing companies to reevaluate their meeting rhythm. This is another example of Align driving users toward Rockefeller Habits’ proven practices. Rather than meeting for one or two long meetings each week, teams get together for short, effective Daily Huddles.

Because the Align tracker is an easily accessible place to keep real-time tabs on what individuals, teams, and the larger company is working toward each day, Huddles are a frequent and regular opportunity to check in on the progress of those tasks, as well as to make sure it’s clear who is responsible for any upcoming pieces.

“By ensuring the whole team knows who is responsible for each chunk of the goal,” Neale says, “it drives executional discipline through the roof!”

But Neale insists “accountability” isn’t the same as “micromanagement,” and — if it’s done well — it’s an approach that can have a major impact on your bottom line.

“Recognition and acknowledgement are what we crave as humans,” he says. “And that’s no different for your employees. If you can show your workers they are doing meaningful work that is contributing toward the company’s big goals, then they are going to be more engaged. Because they’ll feel like what they’re doing is important.”

And, because their work is aligned to their top priorities, it is important!

Seems like a no-brainer, right? But, according to Gallup, over 70% of employees are currently disengaged; and that proves to be a massive waste of resources and productivity. How much of a waste? Well, Gallup estimated it at $7 trillion in lost productivity each year.

But Neale is convinced it doesn’t have to be this way. “With Align and the Rock Habits, there’s a clarity of goals and objectives, as well as a culture of empowerment and accountability. I’ve seen that do wonders for the engagement of my clients’ employees.”

And that can do wonders for your bottom line.

“For any coach,” Neale says, “a key to success is feeling passionate about the success of the client companies you work with. It’s critical.”

He feels like a big part of that success is the Rockefeller Habits, and implementing Align in a way that allows you to implement those habits.

“That’s why the majority of my clients use Align,” he says. “And if they see you’re working toward their success, they’ll understand you have their back. And that’s how you’ll gain their trust. They’ll still see you as a coach and a resource, of course, but they’ll also see you as their closest confidant and a pivotal member of their team.”